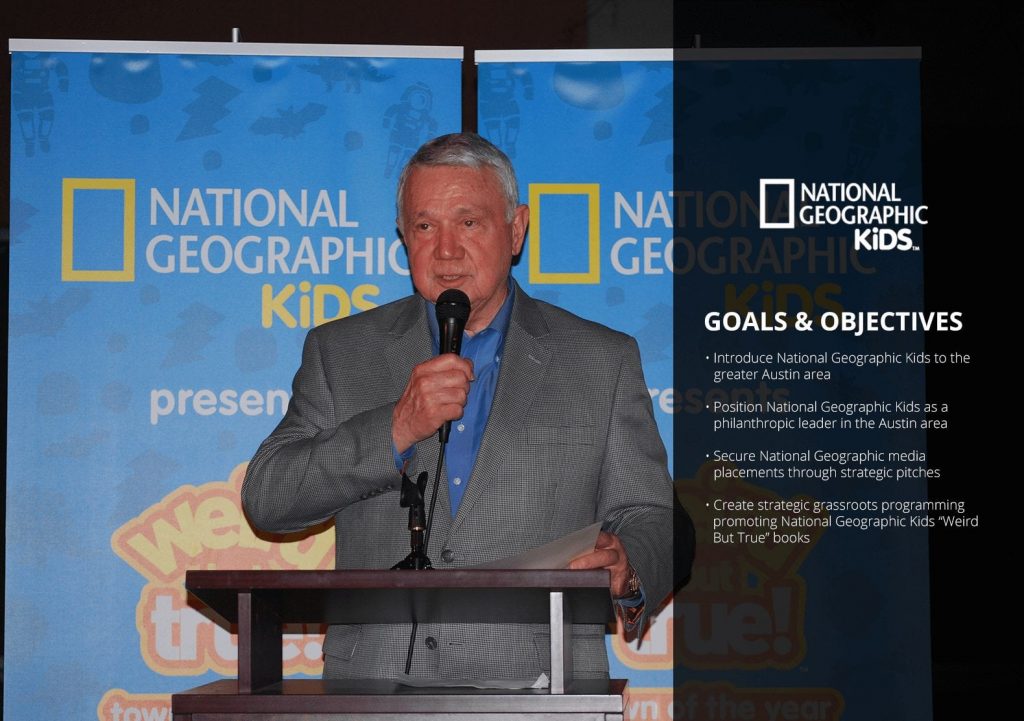 National Geographic Kids (NGK) inspires young adventurers to explore the world through its award-winning magazines, books, apps, games, toys, videos, events, and website, and it is the only kids brand with a world-class scientific organization at its core. National Geographic Kids magazine (10 issues per year) and Little Kids magazine (six issues per year) are photo-driven publications available on newsstands or by subscription in print and on tablets.

National Geographic Kids selected Austin as its inaugural “Weird But True” town of the year. The PR Boutique was retained to develop a PR campaign to introduce NGK to Austin with an ultimate goal of selling NGK products. The PR Boutique engaged the community and the media to develop, promote and celebrate all that is weird and wonderful in Austin with “Weird But True” events throughout the city. The weeklong event began December 4, otherwise known as #WeirdWednesday at a Mayoral Ceremony on the Rooftop Plaza at Whole Foods Market Lamar. As a prelude to the kick-off event, NGK launched a “Weirdest of Austin” survey with the Austin Chronicle newspaper inviting Austinites to cast their vote on what truly makes Austin so unique.  Categories included Weirdest restaurant, Weirdest Sandwich Shop, Weirdest Hotel, and Weirdest Landmark.

The PR Boutique successfully forged NGK partnerships with local businesses and philanthropic organizations. Throughout the week, Austinites of all ages could check out National Geographic Kids’ Weird World Experience at the Whole Foods Rooftop Plaza, where they could play with virtual dinosaurs, dolphins, leopards, and more in this weird augmented-reality experience. NGK donated books to the Dell Children’s Medical Center Library, placed man-made snow on the grounds of The Rise School of Austin for everyone to enjoy, and invited kids of all ages to the Austin Nature & Science Center to learn more “Weird But True” facts about dinosaurs. Rachel Buchholz, the editor of National Geographic Kids magazine, served as the spokesperson for the events throughout the week. The PR Boutique pitched story ideas about the “True But Weird” events to a multitude of media outlets and as a result, received extensive exposure highlighting the fun-filled week.

Partnerships with Local Businesses and Organizations

Where do we begin? You ROCK! Thank you so much for being the best partners we could have asked for in planning, coordinating, executing and celebrating Austin and our Weird But True Town of the Year program. We really could not have pulled this off without you!